Mr Brown’s Pig is the performance name of Chris Brown, a committed storyteller, puppeteer and musician. He has been an inspiration to me for many years now, and I was delighted when he asked me to remake the framework and playboard of his puppet stage.

The dimensions and hinged folding design were to remain the same so that he could continue to use it in the same manner as the previous one, but he wanted it to be constructed sturdily enough to last the next twenty years. As he transports it by strapping it to the roof rack of his car, it is clearly subjected to a fair amount of wear and tear, and this durability requirement needed suitable consideration.

It was my opinion that the original stage had become rickety because the wooden frame had only been butt jointed and screwed together, and there was a lack of sufficient bracing. Also, I noticed that the hinges that allowed it to fold up were not particularly robust.

The answer was straight forward; cut decent sized mitred braces to support every right angle join, and to cut a shallow mortice and tenon for every joint, before gluing and screwing them from the reverse side into place.

I sourced some lovely brass hinges, which although were slightly too wide, were easy enough to trim to size with an angle grinder.

The playboard on the original stage was made from laminated MDF which  unsurprisingly was looking pretty tatty. I chose to use a piece of locally grown hemlock. I let it sit in my workshop for a month or so and then cut it to size, planed it smooth and rounded the edges with a router. We wanted to darken it as much as possible so it’s finished with a dark oak coloured wax.

The result is a robust frame and shiny playboard that should stand the test of time, and allow Mr Brown’s Pig to continue performing his excellent puppet shows for many years to come.

Tula, Rufus and myself have had another crack at making a puppet building tutorial video.  We tried to made the instructions as clear as possible which has led to this one being over 10minutes long. Maybe a bit too lengthy really.

We realised that this video would benefit from some spoken directions over the top of sections of video that have been speeded up. So that we have done. In my opinion it works nicely, and is a simple way to get good sound quality, so we’ll be looking into doing more of that for the next video. Our aim is to produce tutorials that clearly demonstrate and describe the materials and processes that are used, without becoming boring. Please do have a watch.

Oh, and constructive criticism is much appreciated.

The clothes peg puppet making fits nicely into an hour long session. The kids demonstrated their teamwork skills by working in pairs, each member of the team building a left or a right viewing head, and making sure they communicated well so they did matching colouring in.
The video helpful to show the class the building process. They loved the speeded up colouring in and cutting out, but it could definitely do with a description that this is the case in the video. If I hadn’t been there to explain to the class they might have tried to colour in at super speed!
The part that presented most difficulty was the attaching of the head and jaw to the clothes peg.
This was tricky for the 7 year old kids and I think most of them needed help doing that bit.
It definitely calls for this bit of the building process being clearly described and demonstrated in real time, in the video. Possibly though, some other method of attaching the puppet head to the clothes peg is worth considering, because in all fairness, working with really thin double sided sticky tape is very fiddy. Maybe even prit stick would do it? I’ll give it a go and see if it works.
Still, at the end of the session, all members of the class had a finished and functional puppet head, and seemed to have enjoyed themselves, so not a bad result for a first trial run.

We’ve managed to get our first Puppet Wizard tutorial video up onto utube, before helping the year 2 kids in Ashley Down Primary school make some clothes peg puppets tomorrow. This is partly a response to the teacher Charlie Baughan telling me that sometimes kids take in the information better from a video, than from being shown in person. So now this is available to them to have playing in the classroom during the puppet making activity.

We’ve actually been planning to start making regular puppet making tutorial videos for a while now, it’s just taken rather longer than anticipated to get them started. I have to confess that we’ve got a way to go before we reach the kind of production quality we are hoping to achieve, but  the best way to improve, in my experience,  is to get started.
Please have a watch an let us know what you think. I think Tula makes an excellent presenter, and Rufus is already a handy little editor. A family team! 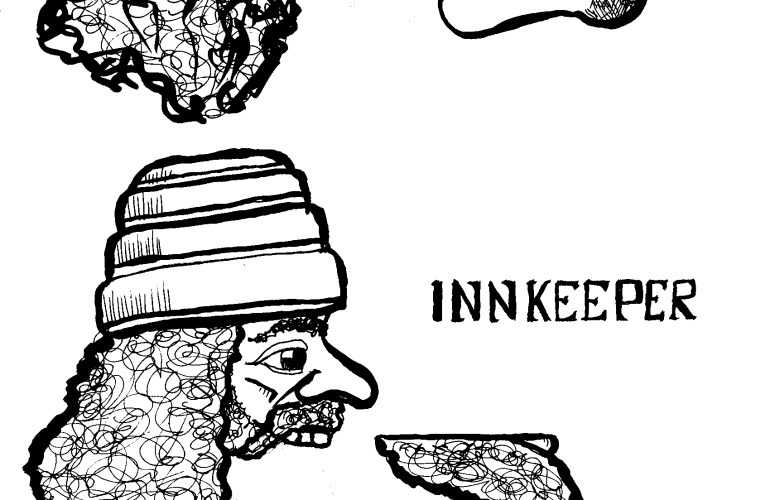 Here’s some nativity character clothes peg puppet characters. Each one is printed twice, looking to the left and right so each character can have a conversation with all the others, while looking directly at them.

Tula and I filmed a video today demonstrating how to make them. Hopefully we’ll get it online tomorrow. 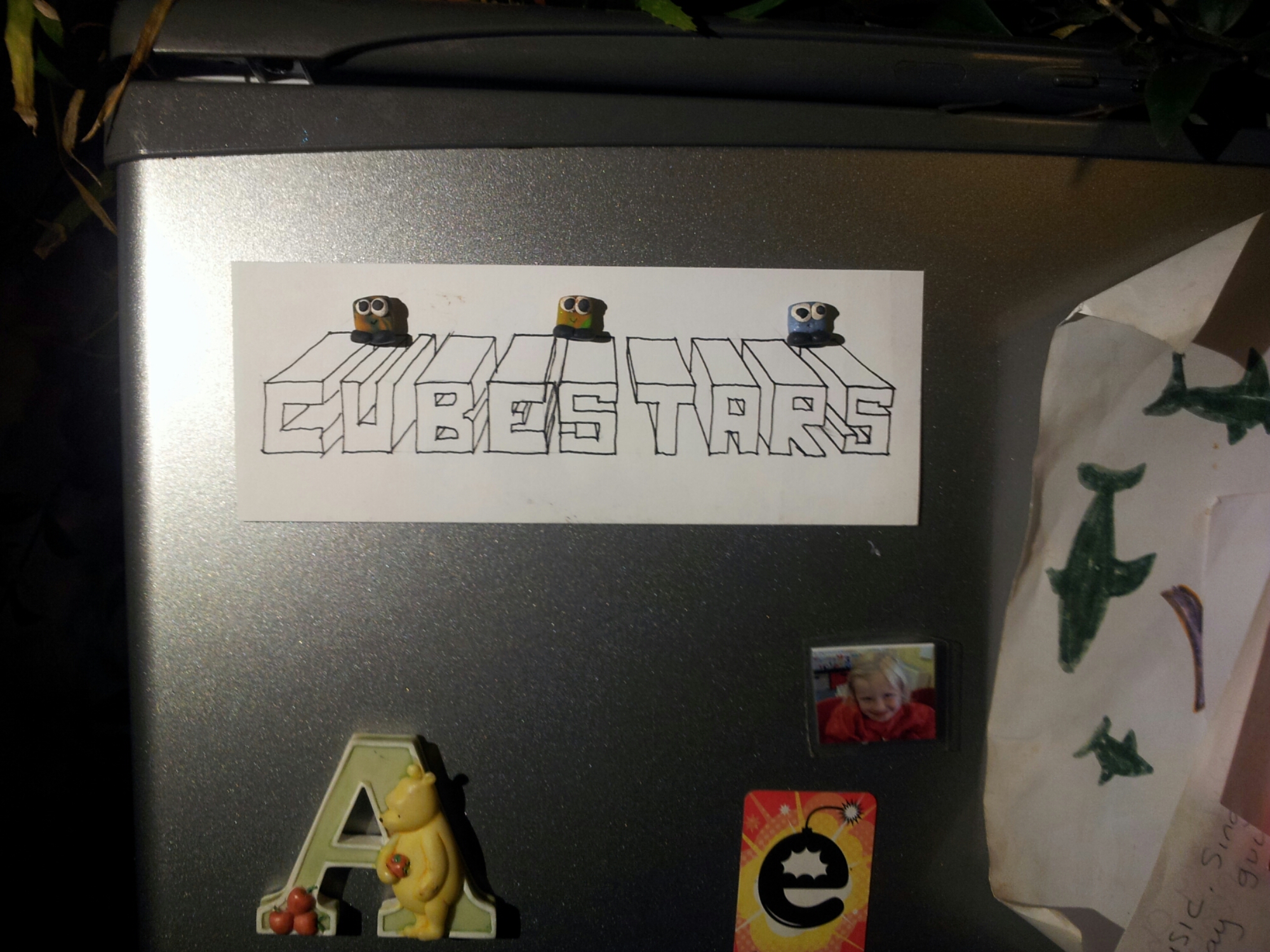 Tula and I had a go at making some Cubestar fridge magnets today. Here they are holding up a sketch of a logo idea. 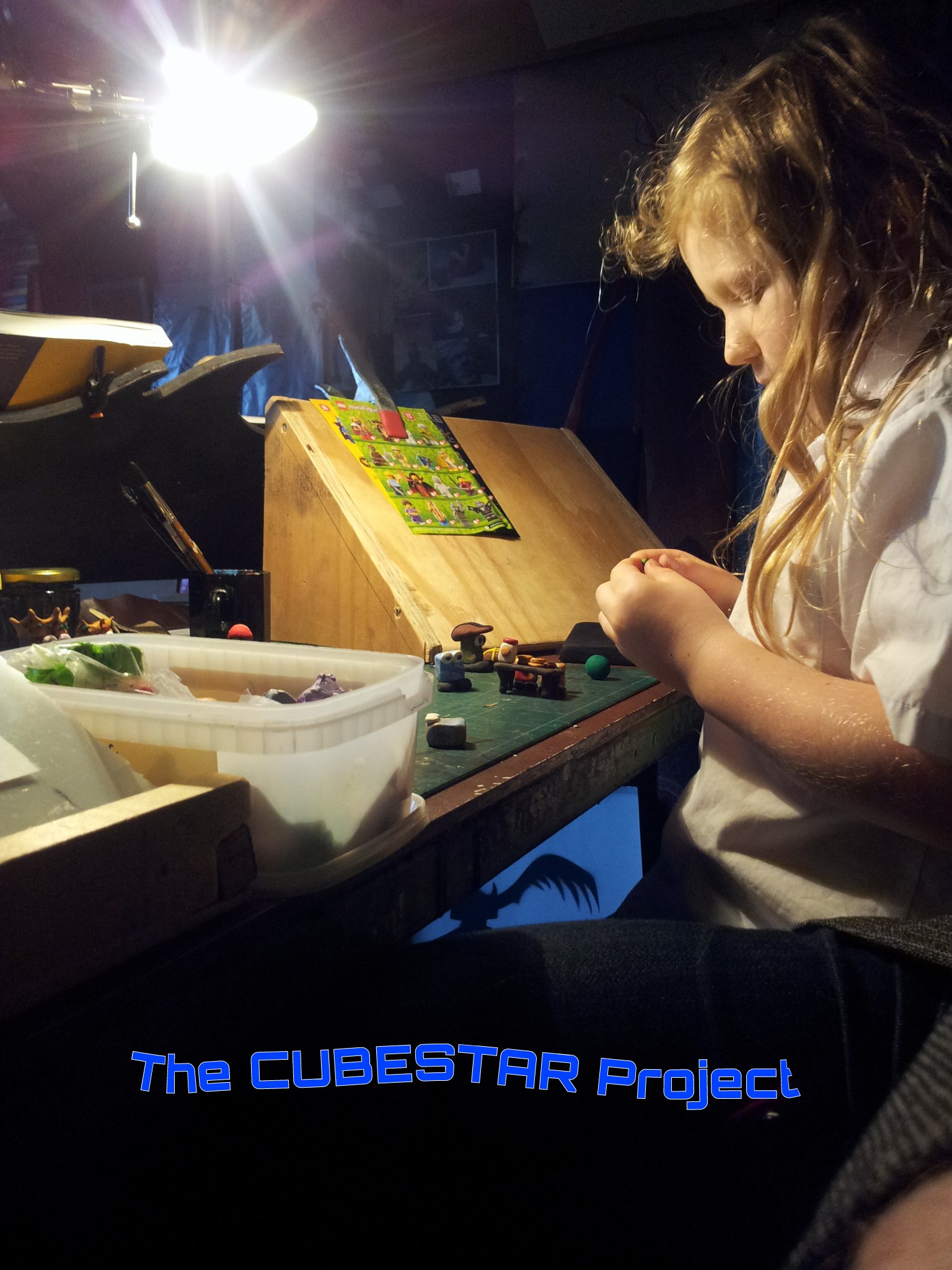 One day this week I realised as I pulled our front door shut that I had forgotten my house keys and a couple of hours later, on returning home from school, Tula and I found ourselves locked out of the house.
Fortunately, I did have my shed keys with me, and the one for the gates to the back lane and so Tula came and joined me in my little shed based studi 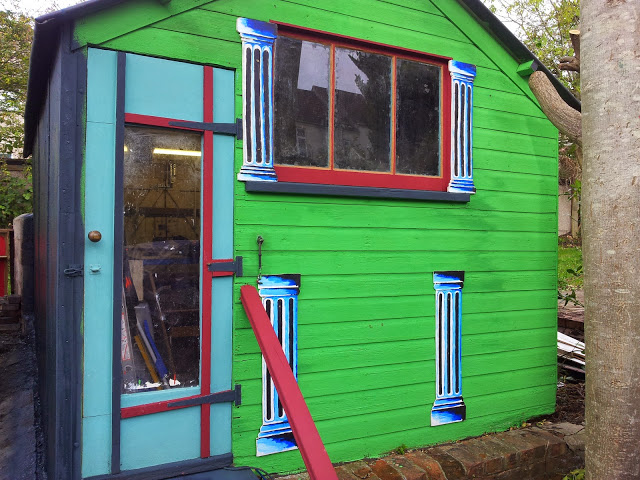 We then spent a really enjoyable bit of time revisiting a project we had started, at probably the peak of Tula’s illness. At that point she could hardly get out of bed, and having read about M.E. sufferers being bed bound for years, I insisted that Tula should walk with me down he garden path to the shed each day, which at points was excruciatingly hard work, and sometimes I would have to carry her back to the house. We never spent any time in the workshop back then, it would have been too much for Tula.
However,  I did sit by Tula’s bedside and model plasticine characters and things, in an attempt to keep a level of creative positivity alive, and hopefully not loose Tula entirely to the horrible looming depression that was inevitable during such a chronicly painful period.
Tula was mainly unimpressed and certainly didn’t want, or have the energy to join in untill one day I made this very simple 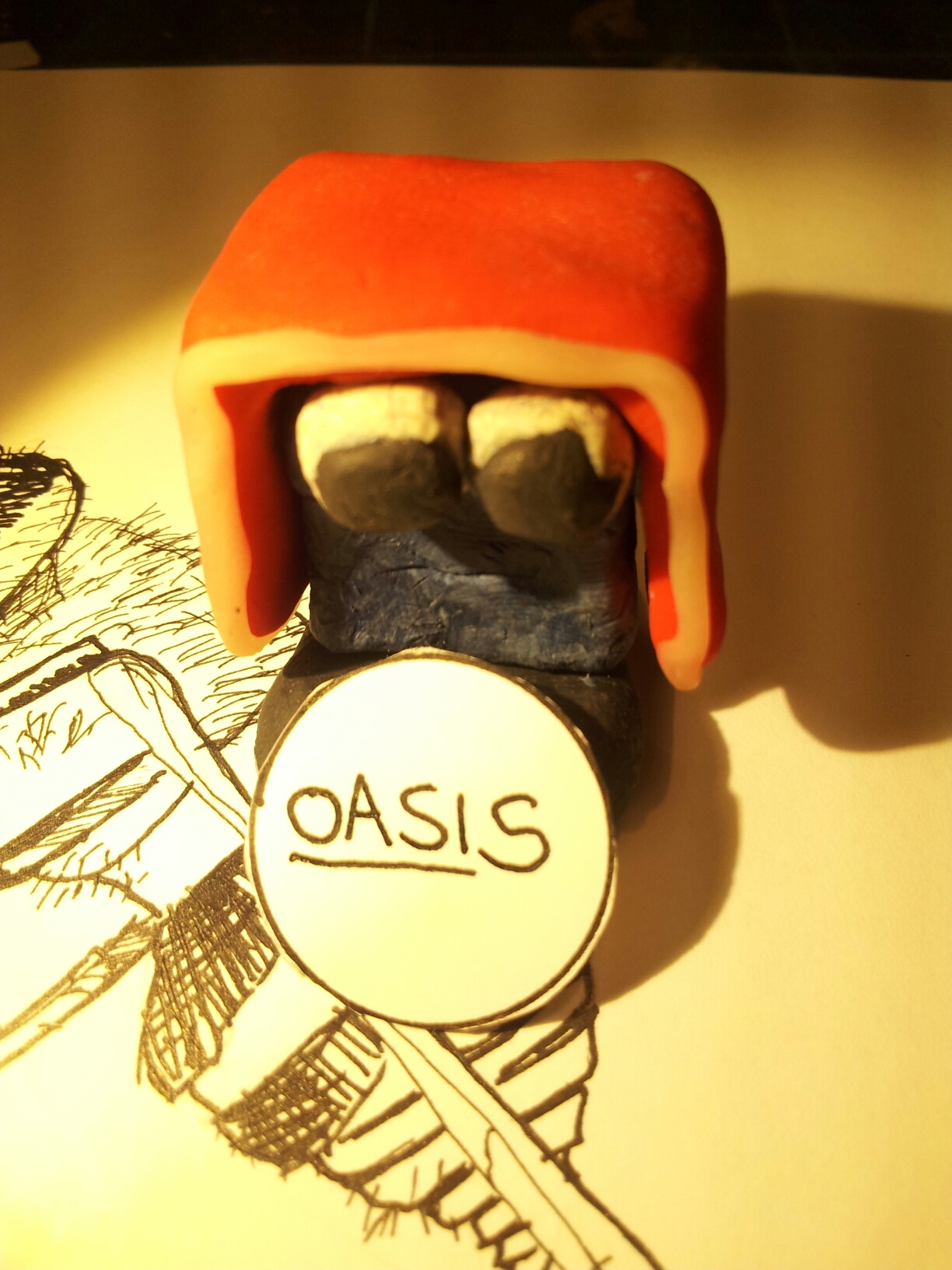 Back then, he didn’t have a hat, but Tula loved him! After very little debating we came up with the name ‘Cubestars’ and so they were born, and a much needed creative focus materialised. I then insisted that Tula do at least 30 mins Cubestars with me each day. She didn’t even have to model, if she wasn’t up to it, but day in, day out we would at least discuss the project. As we talked about the characters and what they got up to, I would sketch ideas into a pad. 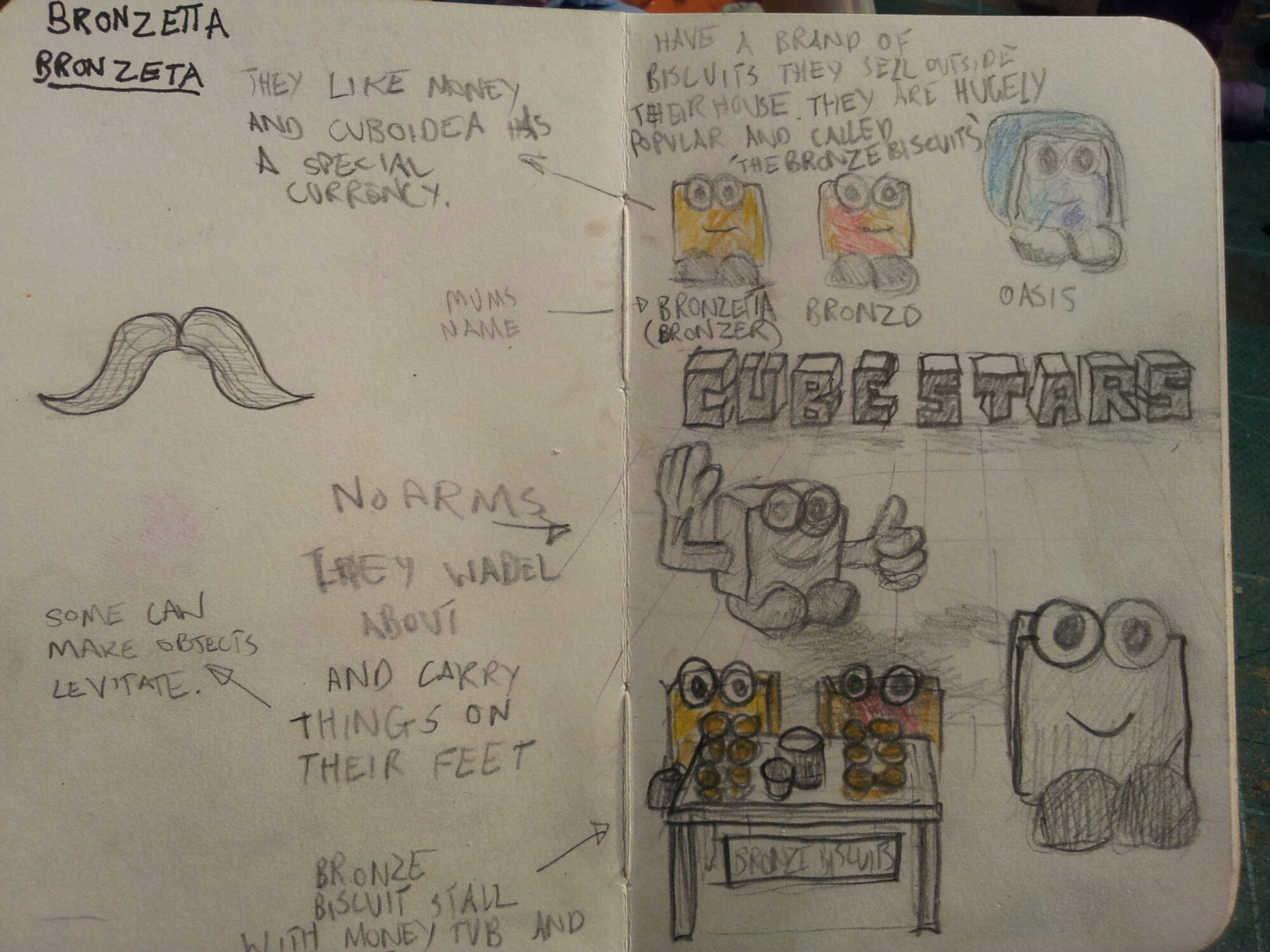 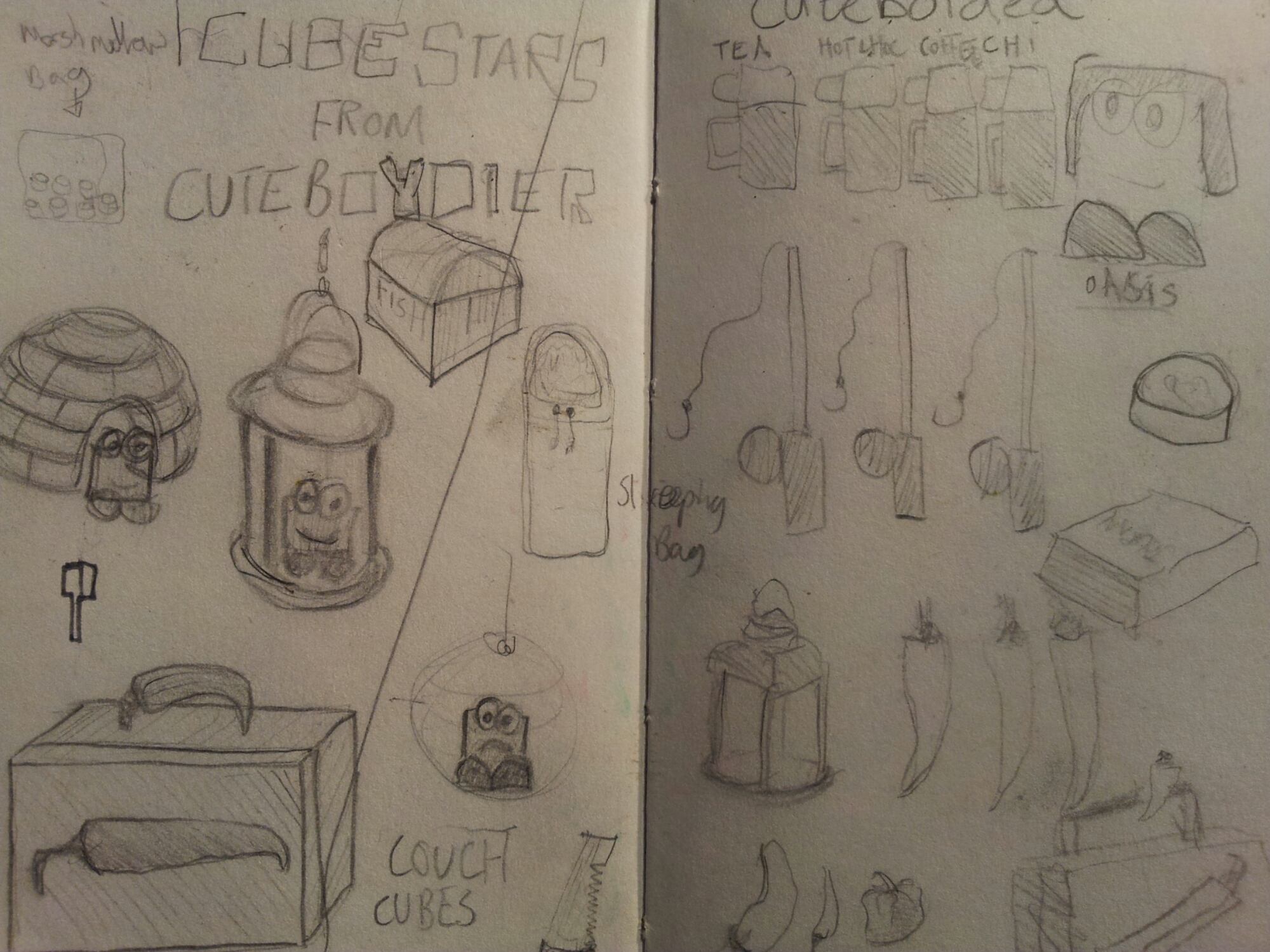 We then moved on from plasticine to fimo and started to build a little world. To begin with, I did the modeling,  but as Tula became enthusiastic about what was happening, she joined it too. We did
We made loads of characters, gave them names, created scenarios, and the props and costumes they needed to enact them. Tula vetoed my idea to give them arms, so we made sure they had feet big enough to carry things on. (Tula is with me as I write this and she has just told me she has unlimited vetos and I have only 3!)
The storyline I remember most fondly is Oasis’s; Because he is made from plasticine, we decided he would go on an expedition to live in the freezer so he could be hard too. That’s why he’s got a fimo hat now. We also made him 3 thermos flasks, for tea, coffee and chai, fishing rods, fish to catch, a fish storage box and chilli sweets.
We then froze a tub of water and drilled a hole in the centre which we filled with vodka so the fish could swim in unfrozen liquid.

Eventually, Tula got a bit bored of doing Cubestars every day, so we boxed them all up and we moved on to something else.
On getting them all out again we were surprised to remember just how much we had made. They deserve a properly lit photo shoot.
Two characters, a brother and sister called Bronzo and Bronzer who have a table they sell Bronze Biscuits from still needed chairs, so on this session we made them, and also made their mum, Bronzetta.

At the moment they are all still spread out on my workbench, and Tula has been down on her own to play with them, so in my opinion,  it’s been time well spent!

For the short bit of time Tula was in school this morning I did these clothes peg puppet templates for Charlie Baughan to use with his class. They are studying Brisol local history so obviously Brunel is there.
Less known about is Colonel Coney who when to North America and brought back to Bristol with him Buffalo Bill and his tribe who formed a huge circus. According to Charlie there were 4 train loads of people involved and 500 horses. It must have been pretty impressive! I’m going to do him and his class some more characters to help their learning.